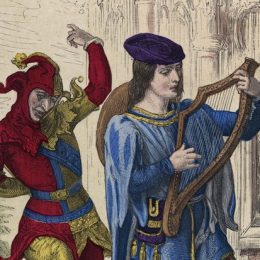 It’s been a fabulously enriching and satisfyingly long journey, but in less than a month I will be ‘directing’ (at least partially) the massive final night party of Brighton Early Music Festival.

It’s the day for breaking rules

Come and join the Feast of Fools!

Everything is upsy daisy!

Everyone is acting crazy! (Disney, The Hunchback of Notre Dame)

This year, the theme of the festival is metamorphosis (etymology μετά ‘with’, ‘after’, ‘between’ plus μόρϕωσις, after μεταμορϕοῦν to transform). The author whose name comes to mind is, of course, Ovid. I studied his Metamorphoses at A Level back in the day. Right now, there’s even an exhibition at a library I visit quite often, the library of the Sorbonne (where I’m finishing off a Masters), about the different ways of reading the Metamorphoses, stretching back to versions in their collections from the 15th century.

I particularly remember the story I studied all those years ago about Midas judging a musical competition (badly) between Pan and Apollo. Of course King Midas, having been rid of his cursed Golden Touch (which reminds me of a song I love from the 60s by a band my friend and colleague Bob Young loves, the Hollies) chose the wrong God – I mean CLEARLY, it’s the harpist Apollo who should win!!! You can see a wonderful illumination of this episode accompanying a work written by Christine de Pizan, the Epistle to Othea (‘L’Épître Othéa’ (ff. 95-141v)) as found in the Queen’s Manuscript at the British Library, a luxurious presentation copy given to Queen Isabeau of Bavaria (b. 1371, d. 1435) at New Year in 1414. There are several gorgeous illustrations in that manuscript of metamorphoses from Ovid’s work, retold in French as moral stories by Christine de Pizan. (Out of interest, there is also a Middle English version known reassuringly as The Boke of Knyghthode). It’s a story about being a refined artistic critic – which is the only kind of critic I want in the audience on the night!!!!

The concept for the concert came from Deborah Roberts, the festival director. Her idea about the Feast of Fools in the popular imagination as one massive raucous merry party that inverted societal hierarchies, led her to imagine how we could bring children’s views to the forefront with a particular emphasis on climate change.

When the idea was first mooted, back in February I think it was, all sorts of things came into my mind. Firstly, I was, and am, just massively keen and grateful to be involved. It’s a real once in a lifetime kind of experience for a medieval harpist to get to be in charge of what is going to be a massive spectacle of a show with two choirs, plus around 50 children singing, plus a brilliant group of young dancers plus a few hoary old instrumentalists! Fortuitously, the original date that was suggested got changed, as I already had a gig that day (you know how it is, no buses for ages then 3 come at once, it’s the same with concert engagements). So the stars smiled upon me I can tell you!

For the next instalment in my Feast of Fools story, visit Festa Fatuorum II – first steps, important manuscripts.

To buy tickets for the first performance of this show, follow this link!