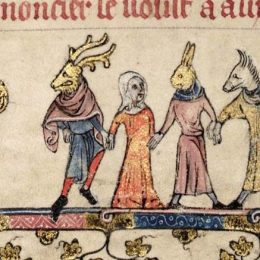 More musical ideas also surfaced in relation to the idea of subversion of order and disruption. I wondered whether we might include anything from the Roman de Fauvel for example. This is contained in a big, beautiful luxury manuscript and is essentially a long moralistic tale against the hypocrisy of government at the time it was compiled (early 14th century) – like a medieval French version of Private Eye. As Grove helpfully says, it is: “An extended medieval poem in two books, of which the second at least was written by Gervès du Bus, presenting an elaborate allegory of royal governance and the state in France in the second decade of the 14th century.” (or you can get a nice introduction from Ellen Hargis who was publicising her Feast of Fools performances back in January 2016). There are lots of amusing little musical interjections about farting and such like (as well as heavy-going-difficult-to-explain political satire) that I’m sad I didn’t seem to find a place for….. (the full version by the Clemencic Consort can be heard on youtube, can’t help enjoying those buzzy opening fart noises!)

Another place for possible disruption of order is the collection of poems in Latin and German known as the Carmina Burana. This manuscript has quite a complicated story to it too. Of course, most people will immediately think Old Spice and “O Fortuna” (apologies for the comedy video there). Carl Orff wrote his version before it was thought possible to reconstruct any meaningful original music for the texts (it’s basically a literary source). Then the Studio der frühen Musik came along and smashed that idea – here’s a version of “Ecce gratum” they recorded in the late 1960s. 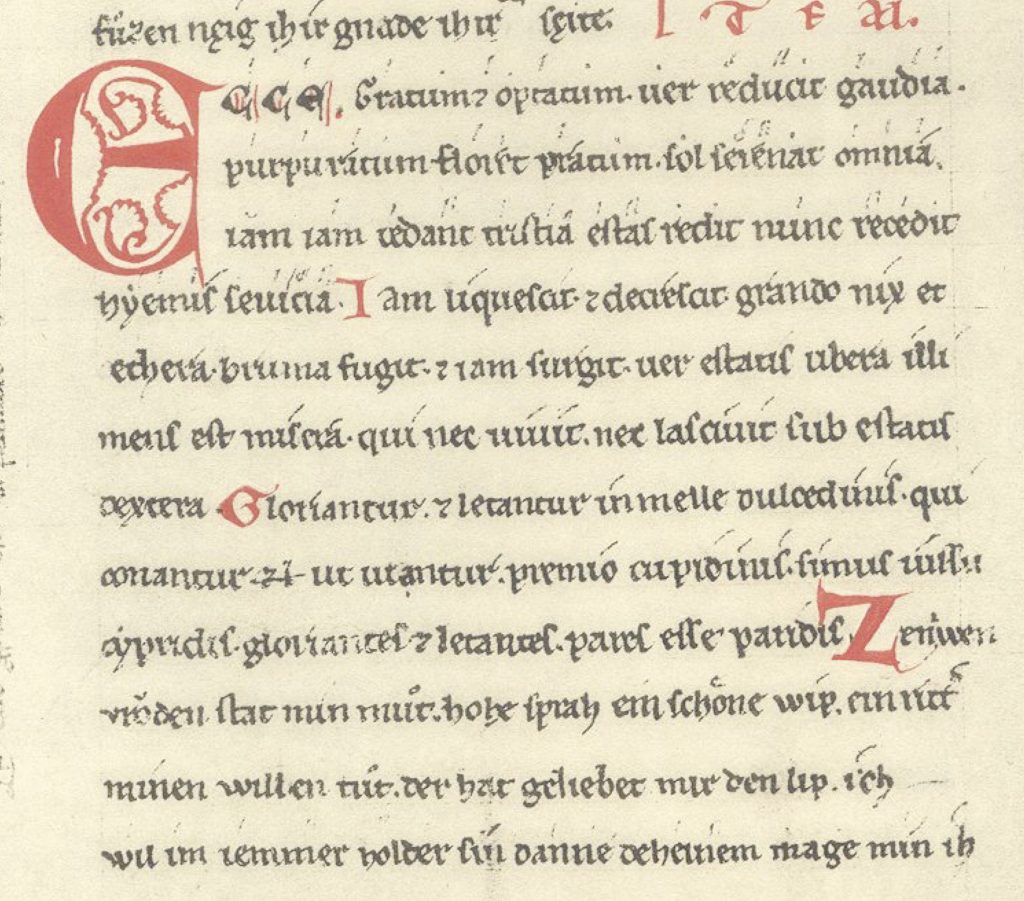 Look at those squiggly neumes! Just over the first strophe though…

This particular song, obviously originally intended to be sung, doesn’t have any other concordant sources that we can compare with. So, essentially the Studio had to make some guesses at the tune, based on those weird squiggly hieroglyphs called neumes squeezed in over the text, and ‘compose’ it before they could actually perform anything. It’s more simple in other pieces because there are musical versions in other medieval manuscripts where the notes are on something more similar to a modern musical stave and thus the pitches are readable (though rhythm is a whole other can of worms we might want to avoid opening here!)

The collection includes Carmina moralica et satirica, Carmina amatoria, Carmina potoria and Ludi. That is, moral and satirical songs, love songs, drinking songs and plays. You can access the whole lot in Latin (with some macaronic and German moments) here. There’s even an “Office of the Gamblers” or Officium lusorum which is a very strict parody of an ecclesiastical ritual. (Interesting to see it forming a central role in a German ensemble’s Feast of Fools show!)