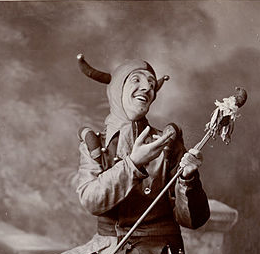 Having spent some time thinking about all sorts of other medieval sources I might tap into, ultimately I ended up sticking quite closely to the idea of an ecclesiastical ‘Feast day’. Any such ecclesiastical ‘Feast day’ actually starts with the night before (like Christmas Eve or Halloween) and lasts through to the following night, so I decided to split the show into sections vaguely following the shape of a full ecclesiastical day. The opening music comes from the services of the Hours. Then we move into a Mass, replete with Kyrie, Gloria, sermon (to be given by a child Bishop, an attested medieval practice – kind of like work experience, after all the pueri in the clerical family were destined to work in the Church for the rest of their lives) and Credo.

For this I really focused quite heavily on the four sources from different cathedrals in France that describe the action and include just masses of musical material, a lot of it specially created for the liturgy of the Office of Circumcision on the 1st January, the Feast day that honoured the lowliest of the clergy, the subdeacons. We associate reversal of social order with this Feast because the subdeacons were allowed to participate in the church services in ways normally reserved for those higher up the pecking order. They got to do things like reading the Gospel, or even carrying Bishop’s regalia and singing his bits of the service for example.

Central to the whole performance concept was the participation of Streetfunk, a brilliant group of young dancers from Brighton. As I was preparing for the show, I was thinking about how they could be involved – what could they dance to? what role could they have in the action of the whole? As I was reading the brilliant book by Max Harris, Sacred Folly, I came across a description of a sacred labyrinth dance with a ball that used to happen around Easter in Auxerre in Burgundy, France. This seemed just perfect as an idea that could include both solo dancers and a bigger group of children as well. As a substitute for a whole ludus or sacred drama, this central dance piece would be perfect after the Mass and the piece of chant known as the “conductus ad ludos” would lead into it. It only then required some thinking about what music might work for that.

Follow my journey into the medieval Feast of Fools….. Festa Fatuorum V – the drinking bit