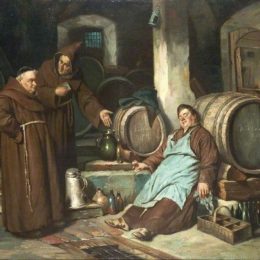 At the end of the liturgical action, the whole community would go to eat together, a feast in the more common sense of the word. The versus ad prandium “O crucifer” (performed in our version instrumentally for the dancers) is found at the end of the Vespers on the day of the Feast of Fools (rather than the Vespers on the eve of the Feast) in the manuscript of Sens cathedral. It was preceded by the rather more famous conductus ad poculum, “Kalendas ianuarias”. The Clemencic Consort recorded a simple version of this in 1979 (to my surprise, the New London Consort seem to have copied their way of doing it if you compare with 25:19 in this video recording https://www.youtube.com/watch?v=f0EO63vO8ig though on their commercial release it’s a bit more developed with more verses and ‘comedy’ vocal sound – I decided not to include this 10 strophe song! There was only so much space…) As it’s subtitle suggests, this led to the cup or poculum, suggestive of the drinking that would follow. There might have been rather enthusiastic carousing around town after the official liturgy had ended in some places and at some times, if condemnations of the practices around the Feast of Fools are to be believed. The fact that it is here indicated in a formal way means that the church was in control whilst allowing the enjoyment of eating and imbibing! A sensible compromise.

So speaking of drinking brings me to more inspiration for the music in the show. “In taberna quando sumus” is a text from the Carmina Burana that has a famous tune added by René Clemencic, who then published it, so that now it seems to be the tune that is set in stone for those words. Even Corvus Corax, who sing it at supersonic speed, use the well known tune (with some extra creative bits on shawms). I however decided to see if there was any tune from the Feast of Fools sources I could use and I found one in the manuscript from Beauvais! This is my favourite verse:

“A hundred drink, A THOUSAND DRINK!!”

For many years, I’ve been holding on to some arcane knowledge about an Anglo-Norman drinking song contained in a manuscript that has since been lost. In true medieval fashion, it’s a “sing this song to the tune of another” or contrafactum (for the posh word). The original words to the tune are about the joyousness of Christ’s birth so the transformation, or metamorphosis, into a drinking song is pretty radical and has been an itch I wanted to scratch for almost 20 years – now I get to do just that in this show! Can’t wait to hear Jeremy Avis give it some drunken-style welly! (here he is doing a sephardic piece with Joglaresa)

Follow my journey into the medieval Feast of Fools…..for the final instalment, see Festa Fatuorum VI – the people and gratitude

For how it all started to fit together with help from a brilliant book about the Feast of Fools, see Festa Fatuorum IV – a medieval Feast day