Home > All sorts of dragons…

All sorts of dragons…

What do you imagine when you hear the word dragon? A big flying beast that breathes fire perhaps, or a clever talkative one that sits on a hoard of gold? 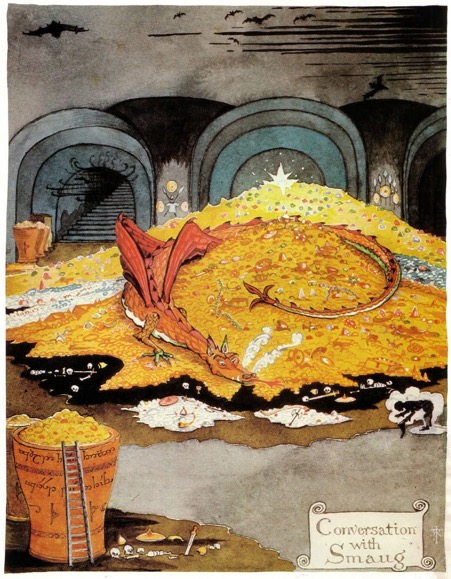 Tolkien’s own illustration of Smaug talking to the invisible Bilbo Baggins; taken from Wikipedia and used fairly. https://en.wikipedia.org/wiki/File:Conversation_with_Smaug.png

Thanks to George Martin and J.R.R. Tolkien, these versions of the mythical beast are firmly embedded in our 21st century mental bestiaries. These are far from being the only sorts of dragons though! What about the ones living in marshes and fens, in wells or in caves and under hills that we come across all over England?

In Essex, Vivien’s and Giles’s county of origin, there is reputed to have been a dragon ‘of marvellous bigness’ during the reign of King Henry II (12th century) at St. Osyth. This was reported by Sir Richard Baker in his Chronicle of the Kings of England from the Time of the Romans’ Government unto the Death of King James (published 1643 and in many subsequent editions). In Lancashire, where I come from, frankly it was too damp and miserable for many dragons, apart from one who had a hide out in Hawes Tarn, near Silverdale near the boundary with Cumbria and the Lake District. Its favourite meal was the local sheep.

Yorkshire though has a rich heritage of dragon stories, from the dragon in Wharncliffe killed by More of More Hall, otherwise known as the dragon of Wantley and the inspiration for a comic opera by Lampe in the 18th century, to the very nasty sounding poisonous dragon of Loschy Wood which had the ability to reassemble itself after getting chopped up.

Further afield, the Mester Stoor Worm is an origin legend about the islands of Orkney, Shetland, Faroe and Iceland. The legend tells that this dragon was a huge sea serpent with poisonous breath who demanded tribute in the form of virgins – not an unusual request of dragons! When he was overcome by the most unlikely ‘hero’, his teeth fell out of his mouth to form the islands in the far north.

It seems that scaly, enormous reptilian creatures are a feature of myths from all over the globe. In China, Japan and Korea for example, dragons are associated with water and are thought of as lucky. “None of the animals is so wise as the dragon. His blessing power is not a false one. He can be smaller than small, bigger than big, higher than high, and lower than low.” (China’s Song Dynasty scholar Lu Dian, AD 1042–1102). In Australian aboriginal mythology, a rainbow serpent is thought to tie heaven to earth and helps symbolise the cyclical nature of things. Ourobouros, Plato’s cosmic snake that eternally eats itself and regenerates itself, became an important archetype for Jung representing different things including birth, death, life, immortality…