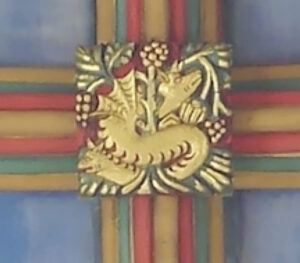 A roof boss golden dragon wrapped around a vine, from St Mary’s church in Beverley

But what did the medieval English people who saw depictions of dragons in their churches think about them? What meanings did dragons have for them?

In the book of Revelation 12:9 we can read about ‘draco ille magnus, serpens antiquus, qui vocatur diabolus et Satanas’ (‘the great dragon, the ancient serpent, who is called the devil and Satan’). This view of the dragon as the diabolical tempter who led Eve to pick the apple and thereby to the fall of man is widespread. Saint George is by no means the only Christian saint to come out on top after a battle with a dragon. I particularly like the story of Saint Margaret of Antioch, who is said to have been swallowed whole by a dragon but saved herself by making the sign of a cross which caused the dragon’s stomach to burst open and let her out again! (She was martyred horribly afterwards anyway, even if she was a real dragonbuster.) Jacobus de Voragine, the 13th century writer of the Golden Legend, doesn’t believe this story and thinks simply that a dragon appeared to her in her prison cell and vanished at the sight of her sign of the cross. She was actually a very popular saint in medieval England and was associated with protecting women in childbirth (which probably accounts for her popularity!)

So, it seems clear that the dragon was akin to the devil* (or in fact, was the devil) and represented bad things like sin and death; seeing a dragon in church would therefore remind you of the possibility of going to hell, remind you to repent and try to be a better person. But I was also really intrigued to find that dragons featured quite a lot in the pageantry and processions of medieval life. For example, the ritual of “beating the bounds” of a Parish on Ascension Day was a way to exorcise demons, a kind of folkloric custom with religious overtones. During the preceding “Rogation” days (which nowadays are mostly about blessing the crops in the fields), an ancient Sarum use stated that on the first two of the three days the procession should be led by a dragon! This was also the case in Italy, where the tail was inflated (maybe by using a bellows system) to create even more impact. On the third day though, the dragon was demoted to the very back of the procession and the lion instead took the lead. It some places, the dragon was then ceremonially “killed” (while still pragmatically preserving the effigy to be slain another year).

Dragons formed part of spectacular mechanical performances too during the Middle Ages**. What a shame that the “Iorge” attested to at St Botolph’s Billingsgate no longer exists! (A shame, but not that surprising seeing as not even the church itself still exists – it burnt down during the Great Fire). This “Iorge” was an intricate model of Saint George on his horse, rescuing a maiden from the dragon with a castle in the background and the king and queen looking on. It was made in 1474 by William Parnell of Ipswich, his son John and an apprentice Wylliam Baker, according to a document now in the London Metropolitan Archives, with the catchy reference number P69/B0T3/D/001/MS00059. This is a vellum volume containing all kinds of info like deeds, wills and memoranda and includes a detailed note about how to maintain the mechanical wonder’s inner workings behind little doors and locks. From this description, it seems as if the George and the dragon moved towards each other and that the George moved his arms to stab it. It really must have seemed pretty magical to behold. Maybe the “wheeled dragon” in the Luttrell Psalter is based on a similar kind of automaton?

So perhaps there was an element of ambiguity in the sight of a dragon for our medieval forebears. On the one hand, SIN! DEVIL! HELL! On the other, FUN! PARTY! PROCESSION! Just like that disquiet I felt when I saw the huge scary dragons of Game of Thrones with tiny little pale kick ass gorgeous Daenerys – on the one hand GO SLAVE RELEASING QUEEN OF AMAZINGNESS! But on the other, OH NO, DON’T INCINERATE EVERYONE INDISCRIMINATELY JUST BECAUSE YOU CAN!

* For much more on the theology behind the meanings of the dragon in the Middle Ages, including tracing it back to interpretations of Genesis 3:15, the story of Christ as instigator of salvation by crushing the devil and throwing out demons, the Immaculate Conception, the dragon in the waters of baptism and lots of lovely images, you should try to get your hands on a copy of W. R. Anne’s article from 2006, “The savior, the woman, and the head of the dragon in the caput masses and motet” published in the Journal of the American Musicological Society, 59 (3) – an incredibly rich discussion!

** This info comes from the article by Philip Butterworth – totally fascinating.

Anne, W. R. (2006). The savior, the woman, and the head of the dragon in the caput masses and motet. Journal of the American Musicological Society, 59(3).

Larrington, Carolyne (2019). Dragons and their origins. Retrieved 25 Apr. 2020 from https://blog.english-heritage.org.uk/origin-of-dragons/.

(2010). Dragons. In The Oxford Dictionary of the Middle Ages. Oxford University Press. Retrieved 26 Apr. 2020, from https://www.oxfordreference.com