Home > About the instruments 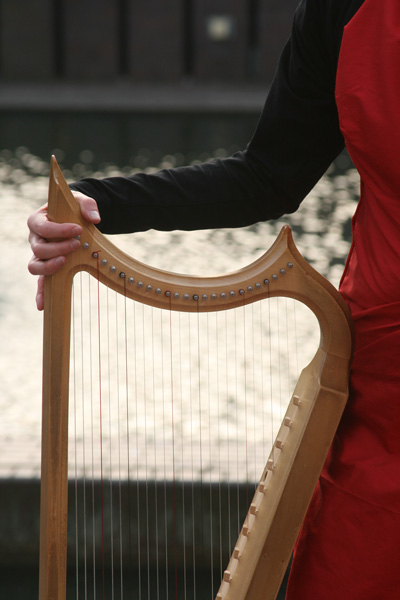 The smaller harp I play has a typical ‘harp’ sound, bell like, pure, angelic, all those sorts of things. Absolutely what you might expect from a harp in miniature.

The larger harp I play has a sound which is unusual now, but was absolutely normal in the 15th century. It is nasal, percussive and buzzes a bit like a sitar. This is because of wooden pegs (brays) which are fitted into the soundbox. The string reverberates against the brays, causing the fundamental of the note to be repeated over and over and harmonics to be increased in a kind of sonic halo. This was obviously a much appreciated effect as it continued to be used for at least two centuries before being condemned as too rustic by Mersenne in his Harmonie Universelle in 1636.

The harp is a triangular instrument sounded by the plucking of fingernails on gut strings…It projects sounds to a great distance, indeed farther than any other instrument except the trumpet, organ and portative.

Goodness me, those harps were loud!

James Talbot, a middle class Englishman who had studied at Cambridge and became a rector (great income + not much work = lots of spare time to do idle researches into interesting topics cf Bill Bryson) in the late 17th century, wrote a manuscript full of information about instruments of his day between about 1690 and 1700. He too mentioned a bray harp, suggesting it was Welsh. He describes its sound as ‘jarry’.